Porsche has revealed the Turbo derivative of the 911, coinciding with the Turbo model’s 40th birthday. As you would expect from a car with such pedigree, the 991-era Turbo is another festival of lightning performance and advanced technology. 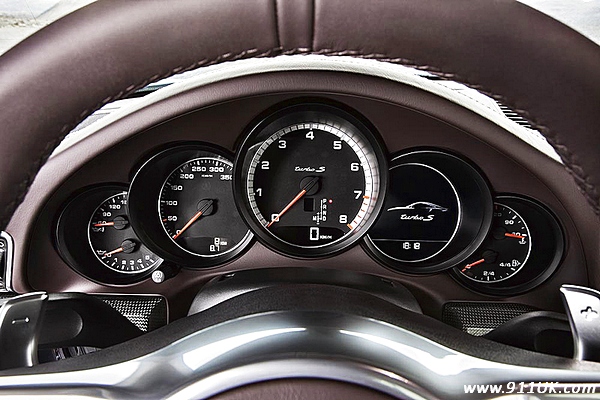 Now in its sixth iteration, the latest 911 Turbo will see numerous technological advances to ensure it stands proud at the top of the 991-generation tree.

Retaining its customary four-wheel-drive layout, the Turbo benefits from a power increase to 513bhp (552bhp in ‘Turbo S’ form) from the twin-turbocharged 3.8-litre flat six, good for a 0-62mph sprint of 3.2 seconds in Turbo guise (with Sport Chrono Plus Package) and 3.1 for the Turbo S. This is achieved while also managing to improve fuel economy by an average of 16 per cent.

The changes applied across all 991 models (aluminium composite chassis, 100mm wheelbase extension) meet those first seen in the 911 GT3 (rear-wheel steering, PDK-only transmission), but the Turbo also brings some of its own cards to the table.

Adaptive aerodynamics is now the order of the day in this performance bracket, and Porsche has given the Turbo a front spoiler and deployable rear wing, both with a choice of attack angles. These combine to enable the driver to choose between optimal efficiency (you’ll need this to attempt the claimed 198mph top speed) or dynamic performance – with the latter, Porsche’s engineers shaved two seconds off the car’s Nordschleife lap time.

The Turbo is visually differentiated from more sedate 911s not only by its traditional signifiers such as the wider arches (the 991-gen Turbo is the widest road-going 911 ever) and the vents on the rear haunches, but also its new all-LED headlights – with camera-based beam control – and two-tone forged 20-inch wheels. The latter will have central locking hubs on the Turbo S.

The Turbo S also receives the novel PDCC active anti-roll system, Sport Chrono Package Plus with dynamic engine mounts and PCCB ceramic brakes, all of which are also available as options on the standard Turbo.

The 40th anniversary of the Porsche 911 Turbo is to be celebrated in style with the introduction of the fastest, most powerful and most technically sophisticated version yet: the new 991-series.

The sixth generation of the 911 Turbo, pictured here ahead of a planned public unveiling at the Frankfurt motor show in September, will be offered with the choice of two power outputs as Turbo and Turbo S models.

In more sporting Turbo S guise, the new 911 Turbo’s reserves swell by 30bhp over the previous version to 552bhp. That’s sufficient to provide it with claimed 0-62mph acceleration in a McLaren 12C-equalling 3.1sec, together with a 198mph top speed.

Porsche has yet to confirm the torque rating of its new engine, but indications are that it has risen above the 516lb ft of the old model, if only slightly.

As with all recent 911 models, the new Turbo has grown in size. Length is up by 40mm, at 4490mm, and width extends 28mm beyond that of the latest Carrera 4 to 1878mm, due to customary flared rear wings.

The adoption of aluminium in the inner and outer body structure is claimed to bring the new car under the 1570kg kerb weight of the old 911 Turbo for a vastly improved power-to-weight ratio.

The increase in external dimensions brings a significant change in chassis geometry, with the wheelbase growing by 100mm to 2450mm and the front and rear tracks extending well beyond the 1490mm and 1550mm of the old model. Larger wheel housings permit the fitment of 20-inch wheels and those on the Turbo S feature centre-lock wheel nuts.

In line with the latest 911 GT3, the new 911 Turbo receives four-wheel steering. Porsche claims that this provides it with new levels of agility and the ability to lap the Nürburgring in a time that undercuts that of the Carrera GT, at a claimed 7min 30sec. It forms part of a new steering system that adopts electro-mechanical operation for the first time.

Also included is a new active aerodynamic package, with a three-stage front spoiler and a modified three-stage rear spoiler to improve downforce.

Further developments include Porsche Dynamic Chassis Control, which uses hydraulically operated anti-roll bars to reduce body roll, pitch and lift. It comes as standard on the new 911 Turbo S and — in combination with dynamic engine mounts, carbon-ceramic brakes and full LED headlamps — will form part of the Sport Chrono package available as an option on the 911 Turbo.

Reacting to criticism of the old 911 Turbo, the new model receives a so-called ‘sound symposer’ to accentuate the sound of the inlet manifold and heighten the overall acoustic qualities of the revised engine.

Also included is a revised multi-plate-clutch four-wheel drive system. It now sports water cooling for improved efficiency and an added ability to place the 911 Turbo’s reserves to the road.

The Porsche model offensive in the anniversary year of the 911 is reaching new heights. 50 years ago, the 911 made its debut at the Frankfurt International Auto Show.

And just ten years later, the first 911 Turbo prototype was at the IAA. On this 40th anniversary Porsche is now presenting the new generation 911 Turbo and Turbo S – the technological and dynamic performance peak of the 911 series.

Playing an equally crucial role are the entirely new chassis in lightweight design with a 100 mm longer wheelbase and larger 20-inch wheels. The PDCC active anti-roll system, which is being offered for the first time in 911 Turbo models, increases dynamic performance even more.

This system is standard equipment in the 911 Turbo S, as is the Sport Chrono Package with dynamic engine mounts and PCCB ceramic brakes; all of these features are also available as options in the 911 Turbo.

The results: The new 911 Turbo S shortens the lap time for the North Loop of the Nürburgring to well under 7:30 minutes – naturally with standard production tyres. The standard sound symposer intensifies the driving experience; it transmits induction sounds of the turbo engine to the passenger compartment via a speaker diaphragm.

More power, fuel economy improved by 16 per cent
The performance partners in the powertrain area are the further advanced engines and the new PTM all-wheel drive system. The turbocharged 3.8-litre six-cylinder engine with direct petrol injection produces 520 hp (383 kW) in the 911 Turbo and 560 hp (412 kW) in the S model. Porsche continues to be the only carmaker to offer two turbochargers with variable turbine geometry for a petrol engine.

Power is transferred to the drivetrain via the seven-speed dual clutch transmission (PDK), which now enables an auto start/stop function with engine shutoff that now activates earlier during coasting to a stop as well as a coasting function. Together with the new thermal management system for the turbo engine and the PDK transmission, fuel efficiency technologies have reduced NEDC fuel consumption by up to 16 per cent to 9.7 l/100 km; these figures apply to both models.

For an even faster and more precise power distribution to the two axles, Porsche developed a new all-wheel drive system (PTM) with electronically controlled and activated multi-plate coupling. The system is equipped with a new water cooling function, so that it can direct even more drive torque to the front wheels if necessary.

Simultaneously, the optimised interplay of the engine, transmission and all-wheel drive systems takes the new top 911 to even better sprint capabilities. The 911 Turbo with the optional Sport Chrono Package accelerates from zero to 100 km/h in 3.2 seconds, which is even one-tenth better than the value of the previous 911 Turbo S. The new 911 Turbo S handles the standard sprint to 100 km/h in just 3.1 seconds. The car’s top speed is 318 km/h.

Widest body of all 911 cars

The two new top models display their performance visually more than ever. The characteristic, expansively wide rear body panels of the new generation 911 Turbo are 28 mm wider than on the 911 Carrera 4 models – they feature a nearly level surface, about the width of a hand, between the C-pillar and the outer edge of the car body. Other differentiating characteristics include two-tone forged 20-inch wheels – on the 911 Turbo S they have hub wheel locks.

The Turbo S is also making its appearance with new full-LED headlights that feature four-point daytime running lights and dynamic, camera-based main beam control, which can be ordered as an option for the 911 Turbo.

The introduction of rear axle steering in all turbo models immensely improves both circuit racing and everyday performance of the two new top sports cars. The system consists of two electro-mechanical actuators instead of the conventional control arms on the left and right of the rear axle.

The steering angle of the rear wheels can be varied by up to 2.8 degrees, depending on vehicle speed. At speeds up to 50 km/h, when the front wheels are turned the system steers the rear wheels in the opposite direction. This actually corresponds to a virtual shortening of the wheelbase by 250 mm, which gives the 911 Turbo unrivalled performance in bends. The system lets the car turn faster into the bend and offers more dynamic steering response. This noticeably simplifies manoeuvring and parking.

At speeds above 80 km/h, the system steers the rear wheels parallel to the turned front wheels. This is equivalent to a virtual lengthening of the wheelbase by a significant 500 mm and gives the sports car tremendous stability, especially at high speeds. At the same time, the steering input by the driver leads to significantly faster build-up of lateral force at the rear axle, which initiates the change in direction more spontaneous and harmoniously.

Porsche developed an active aerodynamic system on the new 911 Turbo models for the first time — Porsche active aerodynamics (PAA). It consists of a sturdy, retractable three-stage front spoiler, whose segments can be pneumatically extended, and a deployable rear wing with three adjustable wing positions.

This makes it possible to tune the aerodynamics of the 911 Turbo to fulfil driver wishes for either optimal efficiency (speed position) or top dynamic performance. In the performance position, all segments of the front spoiler are fully extended, and they generate considerable downforce at the front axle. Similarly, the rear wing is extended to its maximum height with the greatest angle of attack.

This also generates more downforce at the rear axle. Dynamic performance is improved to such an extent that lap times at the North Loop of the Nürburgring are improved by up to two seconds due to this system alone.

The interior was completely redesigned in both 911 Turbo models, and it builds on the 911 Carrera family. The S model is particularly well equipped, offering such features as an exclusive interior in a black/carrera red colour combination and adaptive sport seats plus with 18-way adjustment and memory.

In addition, the seat backrest shells are leather upholstered with double cap seams and various elements in carbon look. Like on the previous models, the Bose sound system is installed as standard; for the first time, a Burmester system is also available as an optional feature.